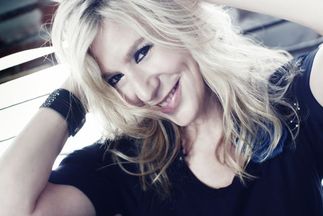 Gail Storm is a New York based singer/songwriter/pianist  who performs in NY as well as on the national and international circuits. Her blues stylings embrace the root music she cherishes and provide a refreshing frame to other genres. Gail draws her musical influences from traditionally-based performers and modern day artists as well.  The list of influences is great. Heroes include: James Booker, Ray Charles, Fats Waller, Louis Jordan, Dinah Washington, Anita O'Day, Henry Butler, Bonnie Raitt, Catherine Russell, and Amy Winehouse.  Many of her fans compare her to a combination of modern day performers Diana Krall and Marcia Ball, with shades of Amy Winehouse. The "Storm" is known to have a “heavy left hand” as demonstrated by her strong, rhythmic bass lines-particularly evident in the “boogie woogie”. Repertoire ranges from traditional blues and boogie woogie to swingin' classic jazz standards, ballads, pop, and originals thrown into the mix. It is the blues stylings that provide the frame for Storm's renditions.

Ms. Storm regularly performs in a wide variety of venues (solo or as bandleader).  She is a member of the band "Back On Bourbon Street". which celebrates the music from New Orleans. Her newest music project is "Storm "n Woodburn", a smokin' blues duo digging deep into the rich repertoire of classic blues along with originals by both Gail and Matt. Gail on keyboards/vocals and Matt on acoustic guitar/vocals.

Storm has opened for Maria Muldaur, Henry Butler, and Bakithi Kumalo (of Paul Simon ).  As bandleader, Gail has had such notable sidemen such as WyCliffe Gordon, Jerry Weldon, Toby Walker, Jake Clemons, ﻿Peter Ecklund, Vinny Raniolo, and Adam Rapa. In addition to her performance schedule, Gail also leads various multi-media music themed presentations such as "Women In The Blues", whereby the original installment explores the Blues Divas from the 1920's.  Storm has been on staff at the award winning Augusta Blues & Swing Week at the Augusta Heritage Center at Davis and Elkins College. Gail has radio, film, television, and theater appearances to her credit.

​Discography includes her trio studio recording "Just The Blues" and a live sextet recording "Live At The Vail-Levitt . Her latest cd "EXPOSED" (2018) is a collection of original music performed solo.

HISTORY:
Storm studied classical piano early on but also displayed a passion for the visual arts. Gail attended the University of South Carolina as an Art major but switched majors to Philosophy. She  completed a  Masters in Philosophy at the University of Notre Dame.  After a stint in Florida as a graphic artist, Gail returned to South Carolina and pursued an education in Art Therapy.  She graduated from a clinical training program at William S. Hall Psychiatric Institute and became the first Art Therapist in the Greenville Hospital System in South Carolina.

Storm returned to New York and secured a job as an Art Therapist for an outpatient Psychiatric Day Treatment Center. She gradually started performing music and now is a full time musician and educator. Gail is also a visual artist who creates abstract mixed media pieces along with amassing a large photo collection of her own.